I am the third born in my family. I have an older brother and older sister and numerous older cousins on both sides of my family. I am not the first anything. I have no baby book. I have long berated (in the most loving way) my parents for failing to give me the same attention given to my brother, the first born, and my sister, the first girl. My baby photos are few and far between. The details of my birth (weight, length) are up for debate. Nothing is written down. My brother’s photos, on the other hand, fill no fewer than 3 photo albums. And I never let my mom forget it. Turns out I’ve been unwittingly setting a trap for 30 something years, and I just walked right into it.

Henry is 14 months old now. What? Henry who, you ask? Right. You hardly know him! Because unlike Lilly, who could hardly have a bowel movement without me blogging about it, Henry has lived a more private existence. I basically announced his birth and then disappeared from the blogosphere. He may actually thank me for that one day, but I just keep hearing my own voice guilting my parents about the fact that they hardly have any photos of me before age 2. My mom always responds, “You were the third! I was tired! I didn’t have time!” To which, I tended to reply with a persuasive and articulate argument that goes something like this: “But Ma-aaaa!!”

Now, two kids into my own family: guilty as charged. Lilly was our first-born, Elliott’s parents’ first grandchild, and my parents’ 8th grandchild, but first granddaughter. Her life is exceedingly well-documented. She was always surrounded by paparazzi. There are pictures galore of Lilly and more hours of video than anyone (other than me) would be willing to sit through. She has two years of milestone calendars, a journal of letters from me to her, a birth announcement cross-stitch — stretched, framed and hung — and, of course, three years of fairly regular posts on MushBrain documenting her daily life. 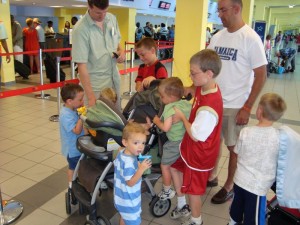 The family "paparazzi" gathering around Lilly at the airport on our family vacation in 2009.

Poor Henry, not so much. I do actually have a hefty quantity of photos and videos of Henry. But thanks to chronic multitasking, most of them are poorly aimed and out of focus. I did also manage to complete a first year calendar for him. But this is his cross-stitch: 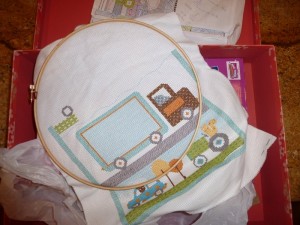 It hasn’t changed much since I was pregnant. I was originally aiming to finish it by his first birthday. Looks like that may have to get pushed to his second.

I eked out one letter to Henry just before his first birthday. I’m already a month behind on his second year calendar and struggling to keep track of the significant milestones of the last month in my mind. And, well, you know how MushBrain has been going. Not well.

Turns out there is something to my mom’s defense. God knows I’m tired. And busy. And I only have two kids. I’m also 10 years older than my mom was when I was Henry’s age, for what that’s worth.

In short, I’m sorry, Henry. I feel your pain. You may feel that you were not given as much attention as Lilly when you look back in my archaic digital photo storage systems and find fewer photos of yourself. But I promise that the reason I did not have the time to take as many photos of you is because you were getting so much attention. And so was Lilly. That leaves little time to take pictures. Or, more specifically, little time to organize the house so that I can find my camera when there is a picture to take. And even less time for blogging. But I’m working on it. All of it.

The sad part of this for me is that Henry is a really cute kid with a fun personality and some of the anecdotes from the first year are already lost in my mushed brain. So before too much more time slips away here are some fun facts about Henry and his 1st year:

I suppose you can’t take a picture of a how a hug feels anyway.

The Guilty As Charged by MushBrain, unless otherwise expressly stated, is licensed under a Creative Commons Attribution-NonCommercial-NoDerivs 3.0 Unported License. Terms and conditions beyond the scope of this license may be available at mushbrain.net.