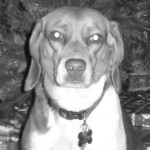 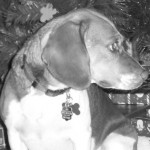 Petty Theft and Breaking a Toddler’s Heart. Dining Room. Mar. 18. 5:34 p.m. Mother and Toddler returned home to find The Nut had escaped confinement while home alone. Toddler’s Shabbat Basket had been overturned and rummage through. Challah in plastic wrap was missing. Toddler was in tears. No trace of challah or plastic wrap has been found.

Trespassing and Petty Theft. Foyer. Dec. 3. 8:14 p.m. Babysitter reported theft of falafel sandwich from tote bag. No trace of sandwich or foil wrapping was recovered on night of incident. A scrap of foil was recovered from The Nut’s fur on Dec. 4. She was released without questioning until additional evidence is uncovered.

Serial Thefts. Patio. July/Aug. 2010 (Multiple Incidents). Repeated thefts of heirloom tomatoes reported. The Nut was observed utilizing front paws for tomato retrieval and is known to canvass the vicinity on a daily basis. Suspect considered hungry, but not dangerous. If observed near tomato plants, Authorities recommend banging furiously on windows and/or running towards her while yelling and waving arms.

Trespassing and Destruction of Property. Lilly’s Room. Apr. 25. 4:45 p.m. An unknown substance saturated homeowner’s pant leg while initiating storytime. Investigation revealed the substance derived from a wet spot on toddler’s area rug. Sniff test determined the substance was urine and not feline. It is suspected that the Nut entered room and urinated upon being left out of yard play.

Petty Theft. Kitchen. Jan. 4. 4:45 p.m. Homeowners returned home to find a fortune cookie wrapper on the kitchen floor. The fortune cookie was missing, presumed eaten. Investigation uncovered a fortune reading: “Your talents will be recognized by the world.” Law enforcement asks that the public not encourage The Nut’s “talents.”

Petty Theft. Family Room/Kitchen. Oct. 22. 7:35 p.m. Homeowners reported finding a stray tomato stem on family room floor. Investigation revealed one of three tomatoes left on the kitchen island had disappeared. No trace of the tomato or its remnants have been recovered.

Destruction of Property and Attempted Theft. Kitchen. Oct. 15. 1:16 p.m. Homeowner returned from Music Together to find a scene strikingly similar to the previous day’s attempted theft. Investigators suspect The Nut returned to the scene to finish the job.

Destruction of Property and Attempted Theft. Kitchen. Oct. 14. 1:25 p.m. Homeowner returned from Gymboree to find a kitchen garbage can had been retrieved from counter and its contents thoroughly destroyed.  It is suspected that the perpetrator was attempting to steal food products however homeowners report the can contained no organic products due to composting. The Nut was seen fleeing the scene.

Petty Theft. Kitchen/Living Room. Oct. 11. 8:18 p.m. Homeowner reported hearing an intruder in living room. Upon entering the living room she found the Nut destroying evidence behind the armoire. An investigation of the premises revealed the suspect had stolen and ingested half an apple pie from kitchen counter.

Petty Theft and Destruction of Property. Living Room. Oct. 4. 3:55 p.m. Victim reported package of crackers had been stolen from diaper bag. Package was later discovered abandoned in the living room. The crackers remained in the package but were severely crumbled. The Nut is suspected.

Petty Theft. Dining Room. Sept. 25. 10:34 a.m. Homeowner returned from visiting a preschool to find that suspect had stolen Cheerios from the table. An investigation of the scene revealed canine footprints in Cheerio-dust on the table.

Petty Theft. Kitchen. Sept. 24. 1:16 p.m. Homeowner returned from Gymboree to find suspect had stolen crate of cherry tomatoes from kitchen island. Only 1 tomato remained in crate. Authorities found a stash of 5 tomatoes under the armchair when suspect was found whimpering and clawing at chair.