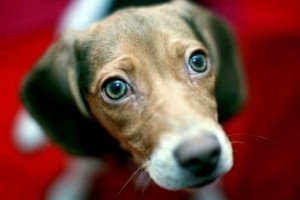 Allow me to introduce Hazel. She’s pretty darn cute, isn’t she? That’s by natural design. She’s a beagle and a crackhead. Her crack is people food and she will stop at absolutely nothing to get it. If you could see the things she is capable of doing, you would swear she has opposable thumbs. Alas, nature stopped just short of that and instead granted her the most adorable puppy face one could imagine, which has managed to protect her from harm and abandonment through mine and Elliott’s countless fits of frustration with her behavior.

Hazel joined our family in the NYC puppy boom of 2001. In the aftermath of September 11, many New Yorkers were desperate for a little TLC. They wanted to give it and they wanted to receive it. What better way to do that than to get a puppy! We didn’t know we were part of some mass post-traumatic stress trend at the time. We just wanted a puppy. (Well, mainly I wanted a puppy and Elliott was willing to oblige.) Plus, as it happened, I had to work from home for several weeks due to my office’s close proximity to still-smoldering ground zero, so it seemed like a good time to train a puppy.

Hazel — often referred to as “The Nut” in our house — has been, hmm, what’s the word….entertaining, challenging, a handful. She’s all of the above and much more. In some ways, she’s a wonderful dog: very gentle, very loving, walks very well on a leash, the perfect companion for Lilly (especially now that Lilly loves to launch her meals off her tray and into Hazel’s ever-waiting mouth). But then there’s her little addiction to food. And it IS an addiction. When we can manage to keep people food away from her — which you will learn, is much harder than it sounds — she cleans up nicely. But the withdrawal process is fierce and she often finds a way to go off on a bender before that ever happens, and afterward, temptation is ever-present and relapses inevitable.

Now, I know every dog loves people food, but Hazel is a step above. As a beagle, she is a problem-solver. If she is not given appropriate problems to solve, she finds her own — most commonly how to get food. (Bread is her target of choice, the fresher the better.) In that pursuit she can leap a kitchen island in a single bound (ok, many repeated, persistent bounds), open cabinet doors, and empty the refrigerator. The latter was a constant source of frustration until we finally broke down and splurged on a bottom freezer last month. Up until then it was years of coming home only to find that the Nut had pried open the fridge door and eaten her way through the better part of our week’s groceries and leftovers. I’m talking POUNDS of turkey, pasta, Chinese food, Indian food, soups, you name it. In recent years, in our attempts to deter her, these fridge break-ins meant that she had ripped through duct tape, broken child locks, endured low voltage shocks, shredded tupperware and/or removed a number of other obstacles between her and the food.

Perhaps even worse than her persistent offenses is her brazen demeanor about it all. Strolling around the house, tail wagging, belly stuffed to the point of bulging, as if she had just come home from a buffet-filled cruise vacation and wanted to tell you all about it. Several hours after one particularly odious fridge-emptying, Elliott and I were watching TV when Hazel decided to run up to her crate during a commercial break. Since Hazel rarely leaves our side other than for mischief, we both raised our eyebrows waiting to see what she had in store. Moments later, Hazel trotted back into the room, tail still wagging, with a whole package of bratwurst hanging out of her mouth. As if we were just going to join her for a late night snack in front of the TV! She seemed genuinely disappointed and confused when her brats were confiscated.

Don’t even get me started on the time she assisted my parents’ mini schnauzer into their cabinets so he could snack on some instant mashed potatoes while Hazel helped herself to their defrosting chicken cutlets and buried them in the couch for later. She’s not called the Nut for nothing.

If nothing else, Hazel has given us many stories over the years that seem to endlessly entertain the people who do not have to clean up the carnage she amasses. So, in that vein, I am introducing The Crime Report: a daily record of our pets’ exploits and adventures. (I’ll save Mowgli’s story for another time. He’s less a criminal than a jerk anyway.)

The Cracking The Nut by MushBrain, unless otherwise expressly stated, is licensed under a Creative Commons Attribution-NonCommercial-NoDerivs 3.0 Unported License. Terms and conditions beyond the scope of this license may be available at mushbrain.net.