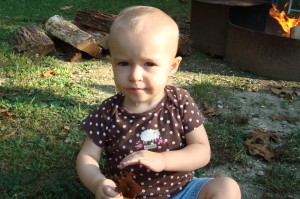 I have been looking forward to camping with my daughter since before she was born. I grew up camping on weekends and for longer stretches in the summer and always loved it. I think those trips gave me an important appreciation for nature and for being unplugged now and then. I couldn’t wait to share that with Lilly.

Things started out well. We were out the door on schedule with Lilly contentedly playing with a toy in the back. If all we had to do to have a good trip was listen to “Hickory Dickory Dock” over and over and over for an hour and a half or at least until she fell asleep, we were in. Unfortunately, Lilly was not. Hickory Dickory Dock lasted for about 15 minutes; the screaming lasted the rest of the drive.

We had never been to Spring Mill before but I had heard good things about their camping. I think it’s important at this point to make one very important distinction because there seems to be some confusion: RVing is NOT CAMPING!! I mean no disrespect to people who enjoy their RVs. I’m sure it can be fun. But camping and RVing are simply not compatible activities and I’m tired of parks departments at the state and national level forcing tenters and RVers to play in the same sandbox. It’s like inviting a slew of book-burning protesters to congregate in a library.

Apparently it was the big candlelight tour through the Pioneer Village this weekend so there were no more primitive sites left — the last refuge for car-campers everywhere. So we were sentenced to an electric site with a water hook-up…across from the modern bathrooms…between 2 RVs…with tiki lights. Ok, not what we were expecting, but our neighbors were nice enough, coming over to chat and offer us some extra firewood. Lilly had stopped crying and was having fun toddling around, picking up leaves and sticks. We cooked up a nice dinner over the fire and enjoyed our meal as the day turned to night. We began the ritual of sitting around the fire. Lilly gave into the exhaustion of missing her nap and fell asleep on my lap.

It would have been just as I imagined it if not for the restrooms aglow immediately across the way, and the myriad tiki lights in every direction, and the near constant sputtering of mopeds circling the campground, and the hum of a/c compressors drowning out the crickets despite the fact that the weather OUTSIDE was gorgeous.

We turned in early knowing that Lilly wouldn’t do well in the tent by herself and watching the parade of people streaming in and out of the restrooms was getting boring. Elliott and I spent the rest of the night contorting our bodies to provide Lilly as much comfort and warmth as possible. It was the least we could do after forcing her to give up her quiet, comfortable bedroom for a tent, filled with our neighbors’ second-hand smoke and the muffled sounds of their television.

I knew Lilly was moving around a lot, but hoped that she would get some sleep, having the rare luxury of sharing a “bed” with mom and dad. But after several hours, she sat up between Elliott and me, looked from me to him (as we pretended to sleep) and used her newly-acquired “what the heck?!” shrug. I couldn’t help but laugh. She had perfectly captured the evening.

Needless to say, we packed up and left the next morning after a surprisingly pleasant trip to the Pioneer Village. So, our first camping trip wasn’t what I hoped it would be. But if we hadn’t been forced out by the RVers, we wouldn’t have returned early to rainy Louisville, and Lilly wouldn’t have been digging in the kitchen towel drawer long enough to find the old lobster claw potholders. And I’ll be damned if this wasn’t the funniest part of my weekend.

The RV There Yet? by MushBrain, unless otherwise expressly stated, is licensed under a Creative Commons Attribution-NonCommercial-NoDerivs 3.0 Unported License. Terms and conditions beyond the scope of this license may be available at mushbrain.net.