I’m a born-cynic, I suppose. I actually consider myself more of “a realist” because I think, realistically, there’s a lot of messed up people in this world. But I’ve been informed that that thinking makes me a cynic. So I guess I’m a cynic. Personally, I don’t think it’s a bad thing, but I do have to admit that it can make for a negative outlook if you don’t allow yourself to see the good in life – the magic. And, realistically, there’s a lot of that too.

The trick, as a parent, is teaching your children to question those people and ideas that could be potentially harmful — strangers, miracle cures and brainwashing toy ads — while not depriving them of the innocence of childhood. It’s the Halloween Paradox: how to warn your child against taking candy from strangers while sending them out trick-or-treating to collect candy from strangers.

My parents were good at keeping the magic alive. The Easter Bunny, Tooth Fairy, Santa Claus. They had me hook, line and sinker. I’m embarrassed to admit how long I believed in Santa Claus. It was far too long. Frankly, there came a time when they should have staged an intervention. But I can’t blame them for wanting to keep the magic alive for me as long as possible.

My parents found a balance on Halloween. They let us get all dressed up and excited for trick-or-treating. Then when we returned home with a sack of candy, they immediately confiscated it and only allowed us to eat the pieces that had been smashed and dissected and determined to be free of staples, pin and poisons. But you can’t really go halfway with Santa. There’s either a jolly old elf who brings presents or there’s not. Smashing and dissecting is not an option. And there are few things more rewarding as a parent than seeing your child light up at the sight of Santa Claus.

Keeping the Christmas magic alive for Lilly has been a challenge. First, she’s an inquisitive kid and it’s not easy to explain away the many inconsistencies that surface when you put Santa Claus and the many Christmas TV specials under the microscope. Second, she goes to a Jewish preschool where many of her friends are reassured by their parents that they are not really missing anything at this time of year because Santa is a myth.

Despite Lilly having already declared, to my surprise, that “Santa is not real,” we try to keep the magic alive. So it was exhilarating to see Lilly become ecstatic and starstruck when she saw Santa get off a Christmas-light covered fire truck at a recent holiday event with her cousins. The magic was alive again! 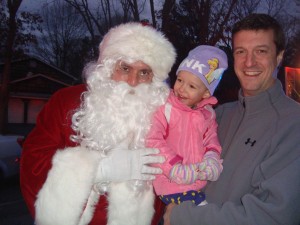 We got swept up in the magic ourselves and thought it would be fun to take Lilly for another Santa visit a few days later. But, man, did it backfire. When we walked into “Santa’s Workshop”, Lilly saw Santa from behind and ran up to say hi to her jolly old pal. But when they came to face to face, she quickly noticed this was not the Santa from the firetruck. To her credit, she gave him a shot to prove himself. But when Santa misidentified the generic monkey on her shirt as “Dora,” the ruse was up. I could see the wheels turning in Lilly’s head.

A Santa who doesn’t know who Dora is? I call bullshit.

Lilly quickly lost interest and walked away mumbling, “That’s not the real Santa.” We tried to salvage the magic by bringing her to see where Santa’s real reindeer were resting up for the big haul on Christmas Eve.

My parents used to take me to this same place when I was a kid and, man oh man, did I eat up the reindeer routine! Lilly, on the other hand, had reason to be skeptical. She’d already been burned. Fake Santa couldn’t be trusted. “Plus,” Elliott accused, “she takes after her mother. She’s a cynic.” So Lilly was not about to jump on the reindeer bandwagon without good cause.

She walked up to the reindeer pen; surveyed the real, live reindeer inside; walked the length of the fence carefully observing these purported magical creatures. I thought we had her when Comet seemed to take particular interest in Lilly and strolled alongside her for the full length of the fence. Hoping to document some more Christmas magic, I asked her to turn around for a picture with Santa’s reindeer. When she turned to me, she was . . . well, a picture is worth a thousand words. 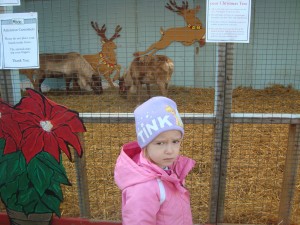 But I bet she’ll believe in the morning….

The Making Magic by MushBrain, unless otherwise expressly stated, is licensed under a Creative Commons Attribution-NonCommercial-NoDerivs 3.0 Unported License. Terms and conditions beyond the scope of this license may be available at mushbrain.net.