What do you get when you take a 4 bedroom lake house in Pennsylvania and add 16 people, including 9 kids, and a dog?

Also, the next stop on our road trip.

And a whole lot of fun.

Since the words “amusement park” and “Great Wolf Lodge” really meant nothing to Lilly before we left for this trip, she has been fixated on one destination: Grandma and Papa’s house on the lake. To Lilly, this house is “Pennsylvania.” Even during our time around Idlewild in Western Pennsylvania, Lilly would routinely and excitedly ask, “Are we going to Pennsylvania today??” She’s only been to this house one other time. She was just about to turn 2 then so her memory is a bit fuzzy. But she remembers playing with her cousins and her grandparents and that is what she is most excited about now.

The drive here was good. It was another 5 hour leg. As is our strategy for all drives of that length, we did the first 2.5 hrs during Henry’s morning nap. We broke up the day with lunch and a tour of a simulated chocolate factory at Chocolate World in Hershey, PA – the exact same tour I did with my family 25+ years ago. We also paid $15 for the privilege of owning this advertisement – oops! I mean, souvenir photo: 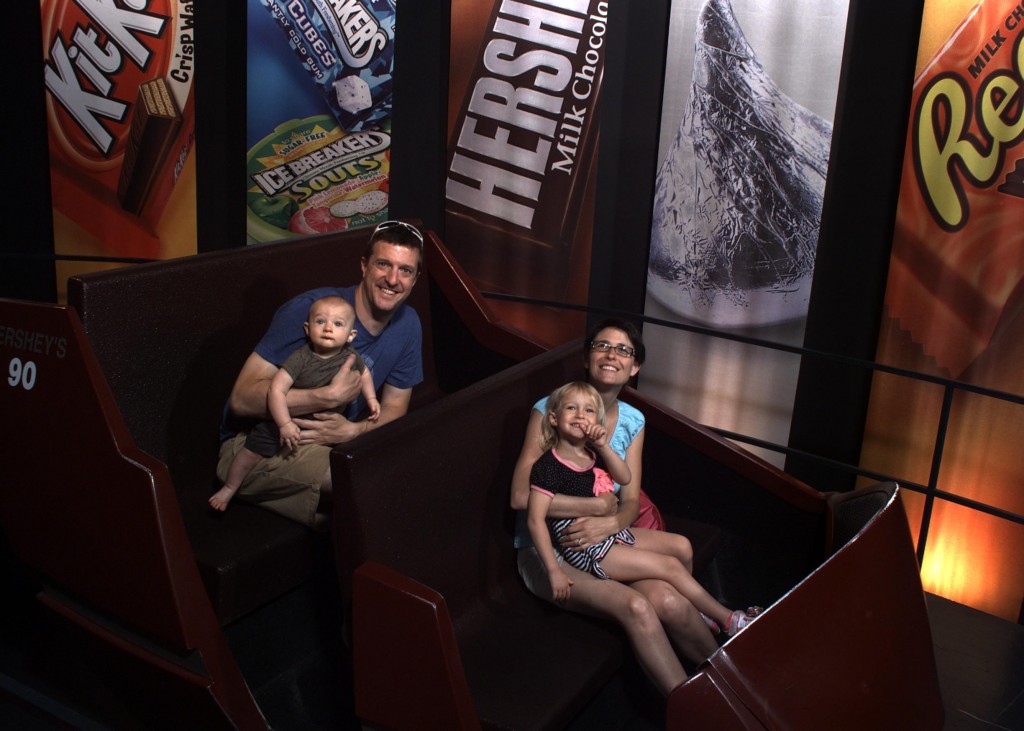 Anyway, it was a good way to break up the day and we arrived at Lake Wallenpaupack in time for dinner, ie. ahead of schedule, and with no crying.  So that was pretty awesome.

I love this lake. I grew up with this lake. I learned to water-ski here when I was 5. For as long as I can remember we have camped alongside this lake. Some of my best memories – fun times, family times, peaceful alone times – took place right here on this lake. After about 20+ years of casually house shopping on each trip up here, my parents finally bought a house on the lake about 10 or so years ago. Unfortunately that was right around the time Elliott and I moved out of New York, so I haven’t had a chance to enjoy it as much as I would have liked. But the thought of Lilly and Henry getting a chance to know this lake and have fun here is so heart-warming to me.

So, at first, I was a little dismayed when we pulled up to the house and told Lilly that we were finally here, expecting an excited “Woo Hoo!” Instead she looked up from her movie on the iPad, looked out her window at the view… 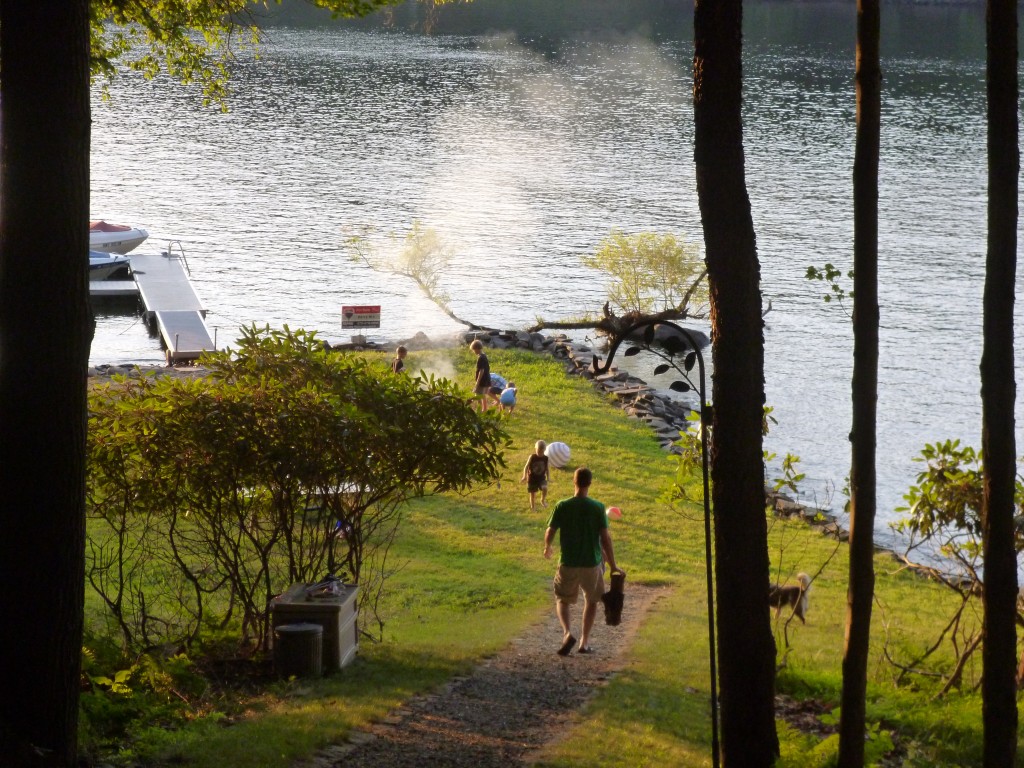 Pretty much the same view Lilly saw when we arrived - minus the people.

…and with pretty much no expression whatsoever, she calmly said, “Mom. Let me tell you something.”

“This,” she said. “is awesome.” And we all had a good laugh. With that, the grandparents descended on our car and the fun began. There was a little bit of a hiccup once all the excitement of saying hello was over when Lilly, staring at the lake from the house, looked at me and said, “but where’s the lake?” I was confused.

“It’s right there. You’re looking at it!”

“No. You said the house is ON a lake. The lake is over there!”

And once again I was reminded just how literal a 3-year old brain is. Thankfully, Lilly agreed that staying in a house that’s 50 feet from a lake is also pretty cool.

The first day and a half was fun, just us and my parents. Lilly got to go fishing for the first time – something she has been SO excited to do for months.

A True Fisherman. Lilly shows us the size of the first fish she caught with Papa. 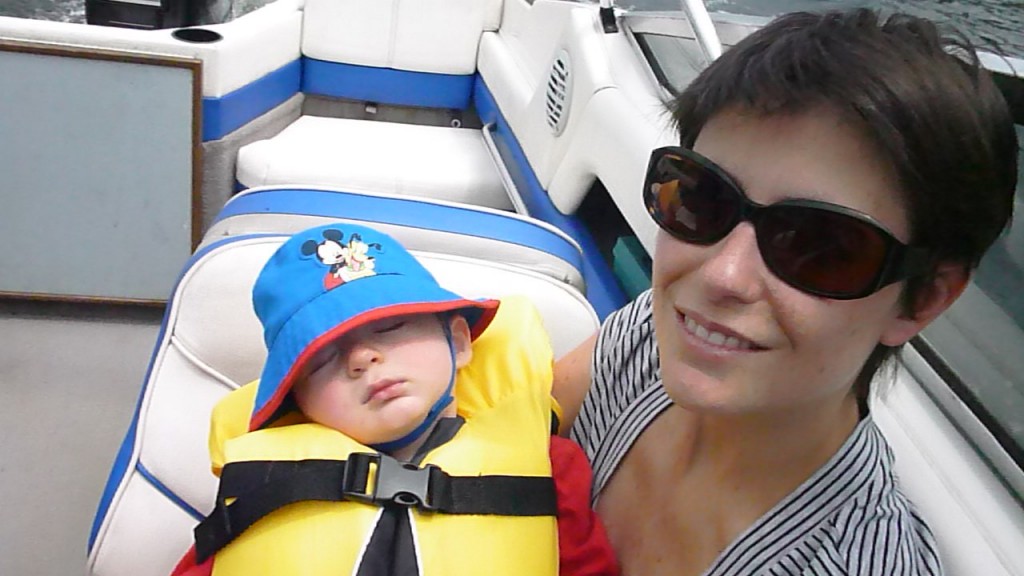 Henry naps in my arms during his first boat ride.

We had lunch on the water, fed some bread to the circling ducks, and the next morning Lilly had a blast tubing. 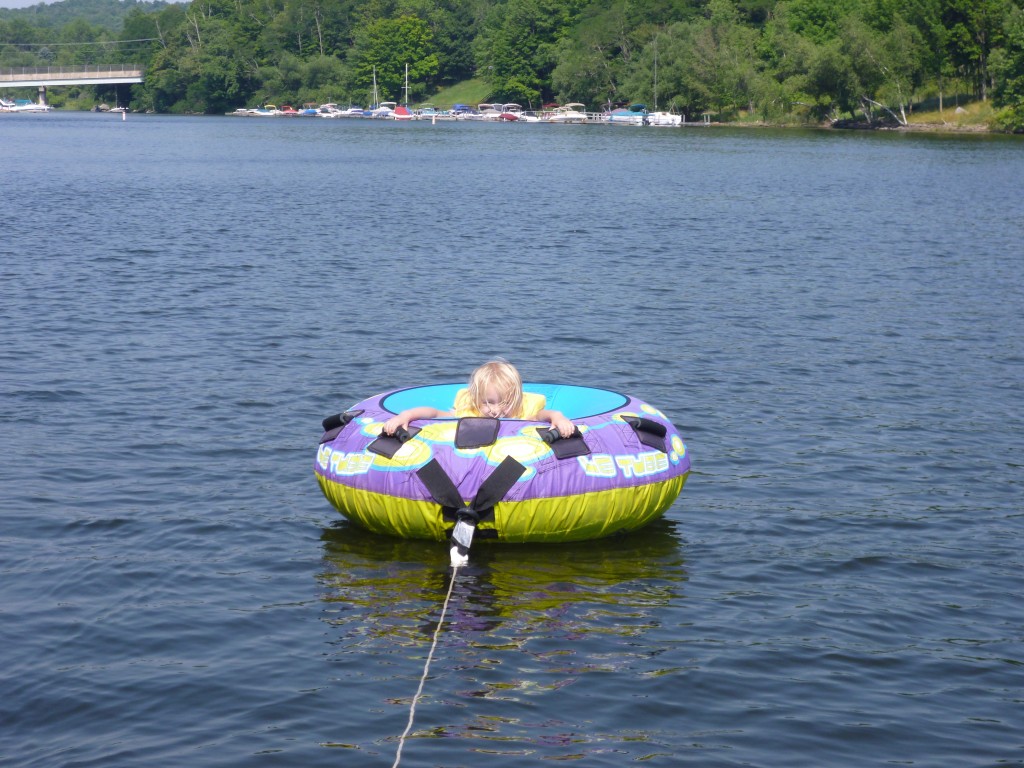 Lilly preparing for her first round of tubing alone.

Although, at the speed Lilly was comfortable going, it was less “tubing” and more “floating with a gentle breeze.” 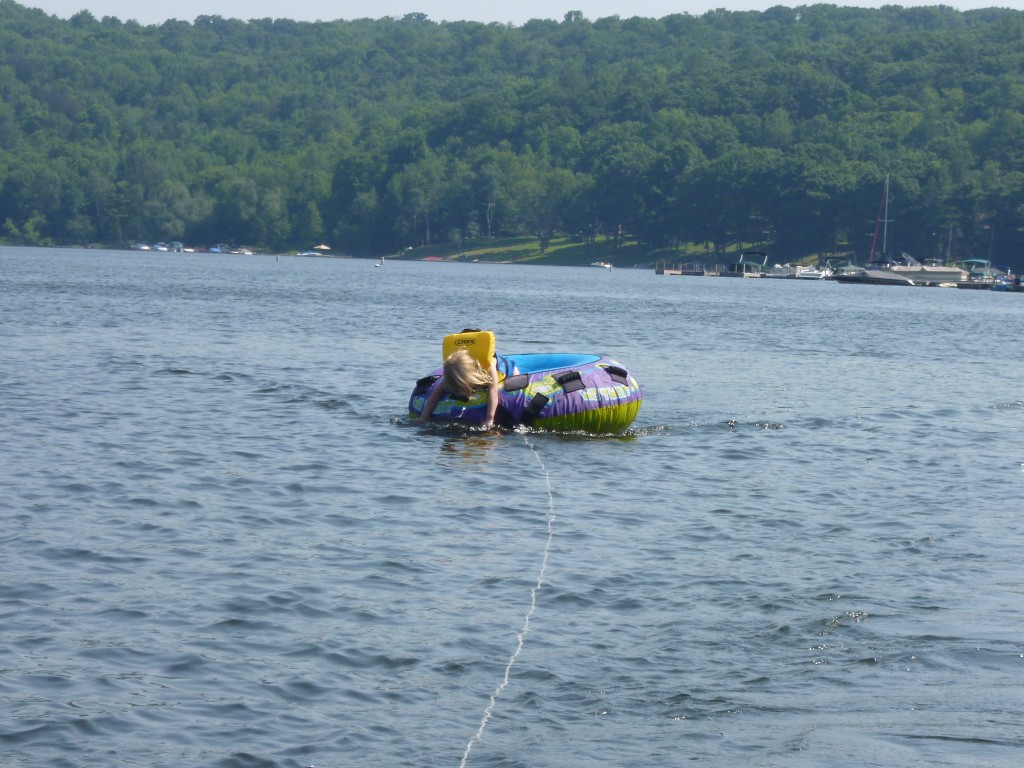 The fact that I was not the least bit concerned about her falling out while doing this should tell you how slow she was going. Also, notice the slack on the rope. My big adventurer!

The next day these quaint and peaceful outings became a bit more raucous as both of my siblings and their families showed up. But this was exactly what Lilly had been waiting for and, boy, has she enjoyed running around with the pack for the last 3 days! 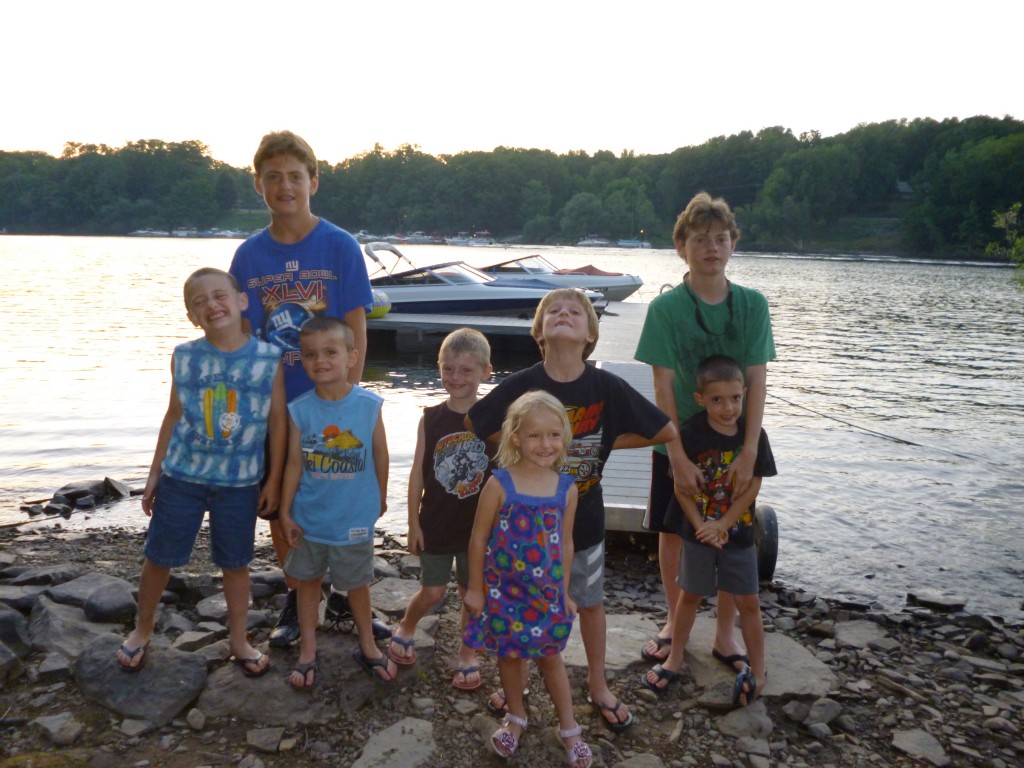 Most of the pack wrangled together for a picture. 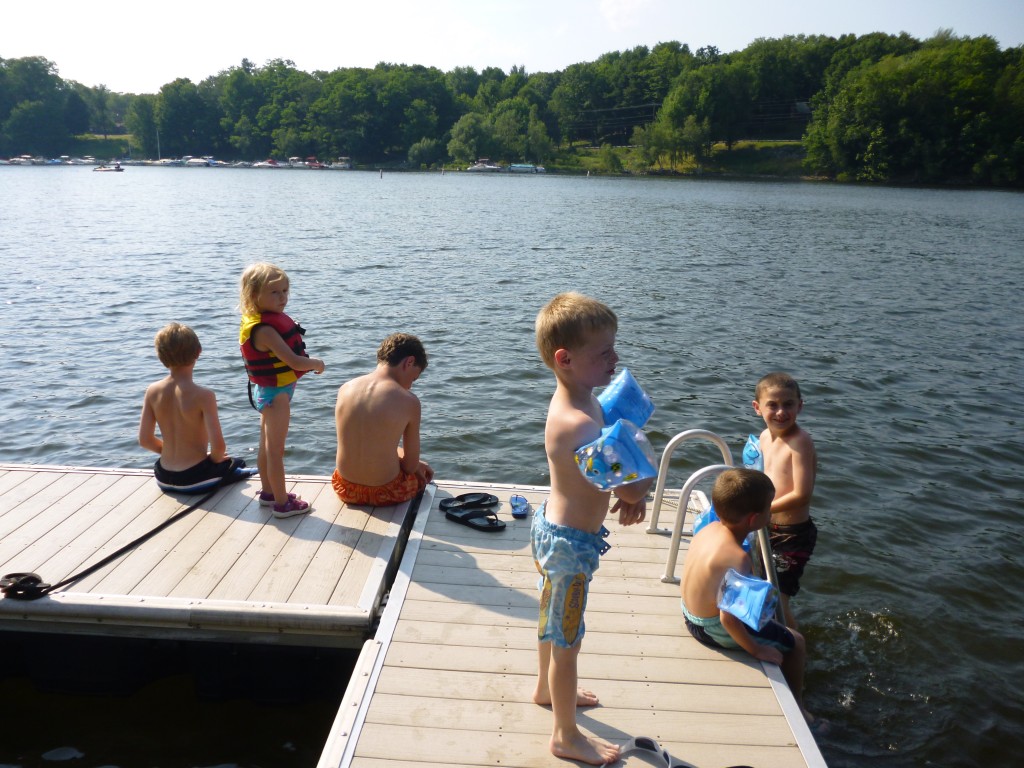 One of the quieter moments with the kids.

For three days, Lilly has been keeping up with her older, boy cousins, her dad,  her uncle and grandfather. (The moms were mostly constant lifeguards and drink runners.) They’ve fished. They’ve thrown rocks. They’ve gone boating. They’ve played every game under the sun. They’ve swam. They’ve searched for kindling and helped build a fire. But if Lilly had to pick just one thing that she loved the most during this visit, I think it would have to be the nightly bonfires and roasting marshmallows for the first time. It might, in fact, be a highlight of her entire life so far! 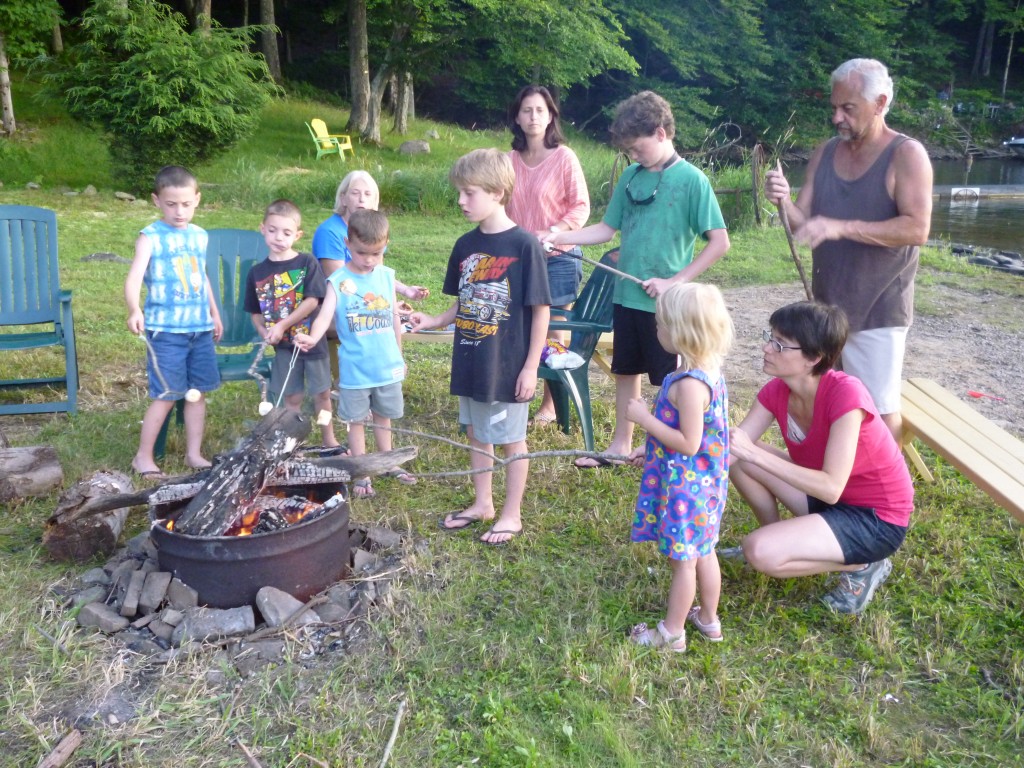 Marshmallow and S'mores Night on the peninsula. 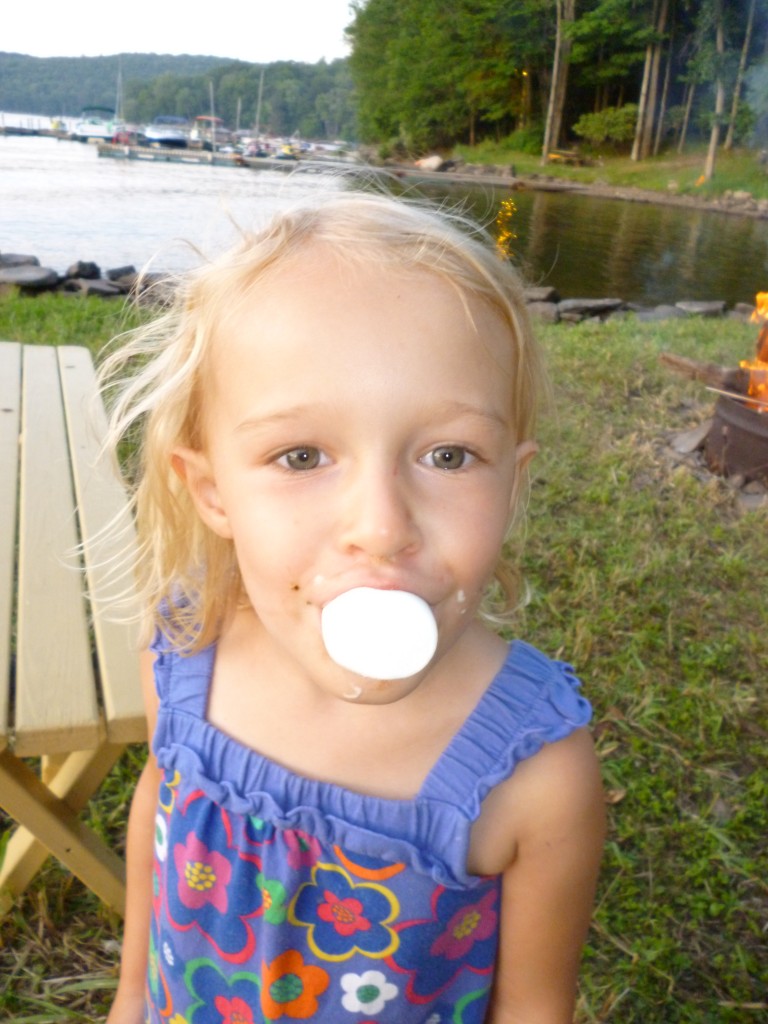 She looks downright miserable, doesn't she?

I lost count of how many times Lilly told me, “I never want to go home! I want to stay here forever!” Music to my ears! I love that she is loving her time at this lake as much as I always have. It’s exactly what I hoped for when we added this stop to the trip.

The The Lake House by MushBrain, unless otherwise expressly stated, is licensed under a Creative Commons Attribution-NonCommercial-NoDerivs 3.0 Unported License. Terms and conditions beyond the scope of this license may be available at mushbrain.net.