This is day 1 of our first family road trip. That’s right – a road trip with a 3 year old and an 8 month old. Maybe we’re adventurous, maybe we’re nuts. We’ll find out soon enough. The good news is I actually have time to write now. Even if it is only thumb-typing on my iPhone.

By the end of this trip, we’ll have driven a minimum of 52 hours, according to google. And since there’s no google setting that factors in potty breaks, nursing sessions and child and/or adult meltdowns, it will most certainly be many more. How that translates into grey hairs and stress levels has yet to be seen.

So far, so good. We’re 1.5 hours into a slightly more than 2 hour drive – one of our shortest stretches. We’ve been listening to Mr. John Gage, a big celeb on the Louisville preschool circuit, nonstop. His album is only about 30 minutes long so we’re onto Round 3. Sometime during Round 2, Henry stopped screaming and Lilly stopped kicking Elliott’s seat. Now Elliott and I are driving nose down, fingers-crossed, hoping not to disturb the equilibrium.

I’d never been to GWL before today. But we’ve been here about 6 hrs now and I’m a big fan. I never felt like it was a good match for us because Lilly is not particularly adventurous, especially when it comes to water, and I just didn’t think it would be our cup of tea. But I was wrong.

Lilly, who typically runs away from even the lightest spritz of water from a sprinkler, actually went on a pretty major waterslide today and got off begging for more. And, as for us, we’re converts. Family-friendly, self-contained (i.e. no driving and no in and out of carseats), surprisingly good food, beer, these magic wristband things (i.e. no keys or wallet to lug around) lots of activities to wear out the kids and separate sleeping space for them when they do drop (we’re in a Kid Kamp room). I gotta tell you, it’s pretty awesome. Now if the waterplay followed by arcade games followed by 8pm pajama storytime has the desired sedative effect, I will definitely become a regular here. [Update: It did!]

Did someone say "pajama storytime"?

So no humorous crazy family vacation antics so far. There was a beer that Henry managed to pull over, which missed my lap by about a millimeter and the prune juice we’ve been pumping into Henry for 3 days did finally take effect just as we were leaving home, forcing Elliott to change shirts last minute. But really, those were near-misses. A pretty darn good day by my standards. 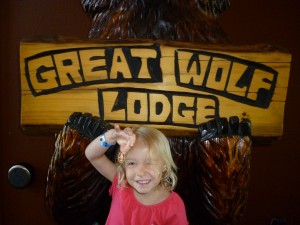 Update: Henry refused to sleep from 3 am to 5 am, which means I didn’t either. I also had to routinely apologize to Lilly for waking her since she and Henry were sharing a room. And i had to field absurd suggestions from a sleep-starved Elliott like “just put the pack and play outside”. Outside! Mind you, not on some private balcony outside; but just outside on the ground floor about 25 feet from a parking lot. No, thank you!

One good thing to come from that sleepless night, however, was overhearing some adorable comments from Lilly. During a brief let-him-cry-it-out interval, there came a cute, sleepy voice:

Brings tears of joy to my eyes.

So does the fact that GWL has a Starbucks.

The Destination: Great Wolf Lodge by MushBrain, unless otherwise expressly stated, is licensed under a Creative Commons Attribution-NonCommercial-NoDerivs 3.0 Unported License. Terms and conditions beyond the scope of this license may be available at mushbrain.net.