[Note: I apologize for the long gap before this posted. Apparently the WordPress App for iPhone and I do not see eye to eye. I think we’re back on schedule now.]

I’m not going to lie. Last night was rough. We didn’t get into the hotel until about 8 pm — 2 hrs past Henry’s bedtime. Fortunately there was a lot of sleeping in the car, which made for relatively painless travel. Unfortunately, all that sleeping in the car translated into terrible nightsleep. Henry simply would not go to sleep. And since he was sharing a room with Lilly that meant she was up late waiting for a calm room to sleep in. Then much later, once everyone was ready to sleep, Henry was up again. And then pretty much every 2 hours thereafter.

Needless to say, it wasn’t supposed to happen that way. Since we are spending much of this vacation in family homes, we decided to splurge on our few nights in hotels. Elliott and I agree that one of the worst things about having kids is staying in hotels as a parent because after you finally settle the kids into an unfamiliar bed/crib, all that’s left to do is sit there. In a dark room. Perfectly quiet. God forbid you have to whisper something or *gasp* flush a toilet, a little head is sure to pop up and the process begins again.

So we booked our room in Donegal before we left Louisville. It was our most luxurious hotel stay — a 2 room suite. This seemed like a brilliant idea: grown up space and kid space. Yet, for some reason about which I am very unclear, all 4 of us slept in the same room last night. Correction: All 4 of us spent the duration of the night hours in the same room last night. For a brief time, 3 of us slept. I lay there in bed listening to 3 separate snores. I think my longest stretch of sleep was about 45 minutes. How refreshing.

Once properly caffeinated, we’re off to spend the day walking around Idlewild. We’ve never been. I’ll report back.

Idlewild was great. Lilly continutes to surprise us – or at least me – with her sense of adventure. She didn’t decline any ride that she was tall enough to ride (and there were many). The Caterpillar was the only ride that she disembarked wearily mumbling, “That was too fast for me. I don’t like that one.”

We all had a pretty good time, I think. Of course, there’s not much for an 8 month old to do at an amusement park, so one of us was always waiting in the wings with Henry, but the lines were short; the weather was perfect and both kids were in good spirits. Can’t ask for much more than that.

Once again we were pleased with the family-friendliness of our choice of destination. Of course, this is the reason why these stops were added to our road trip, but since we hadn’t actually been to either GWL or Idlewild, you never know for sure. Now we do.

Idlewild is a great little amusement park for young kids. I think kids older than about 10 would have been bored (although we skipped SoakZone because it was probably more for bigger kids). But for under 10, it’s great. Even Henry, now 8 months, was able to enjoy a little bit of Story Book Forest, aimed at the littlest of kids, and a train ride.  He might have also noticed that he attended a Thomas the Train show. He certainly didn’t object. Lilly loved it. She apparently bum rushed the stage to join in the show while I was in the restroom. 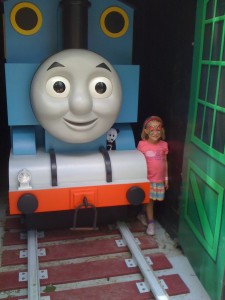 Lilly with Thomas and her new stuffed panda (wedged into Thomas) -- thanks to my mad wack-a-mole skills.

Basically, it’s the kind of quaint and fun-filled amusement park that your parents or grandparents took you to back in the day. Exactly. 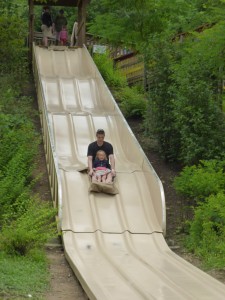 It has not changed since then. Mostly for the best. 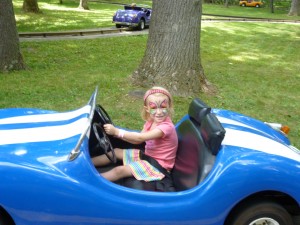 Although I admit the constant bragging about being named Best Family Park in the World was really grating on me as I sat breastfeeding Henry in a public, albeit empty, pavilion for lack of any place more private (and sanitary) to nurse. Just a little improvement would be appreciated. Otherwise, it was a perfect day of family fun.

The To Idlewild! by MushBrain, unless otherwise expressly stated, is licensed under a Creative Commons Attribution-NonCommercial-NoDerivs 3.0 Unported License. Terms and conditions beyond the scope of this license may be available at mushbrain.net.