By the time we got to Elliott’s family’s home in Connecticut it was past Henry’s dinnertime, nearing his bedtime, and he’d been screaming for at least a half hour. We were all very happy to get out of the car and settle into our next stop quickly. I was aware, however, that the first order of business was to get Henry to sleep, and the first night of sleep in any new location is a challenge.

At least, I thought, he’ll stop screaming once we’re out of this car! And he did. But 1 minute later I carried him into a room of unfamiliar faces and his lip curled under and the tears started streaming.

Henry has one of those perfect crying baby faces that is so textbook — lip quivers, curls under, tears well up, then stream one drip at a time down his chubby cheeks — you don’t know if you want to laugh or cry when you see it emerge. This time I knew I wanted to cry. Actually this time I wanted to lock myself in a soundproof room and sleep for 12 hours. Hell, even a solid, uninterrupted 6 or 7 would be heaven. I got 2 hours that night.

We’ve been to this house many times. This is Elliott’s Lake Wallenpaupack. But in his case the roots go even deeper because his mother’s generation and that of his grandmother, and great-grandmother also spent many a summer day on this very shoreline. And now, once again, we are introducing our children to this place near and dear to the heart.

Lilly has been here many times now and loves coming here. So it was obvious that the trip was taking its toll on the kids when Lilly quarantined herself in her room and was begging and crying to go home. This was an exhausted child. Turns out keeping a 3 year old up til 10 p.m. every night for a week is not a good idea. Go figure.

We knew we wouldn’t be leaving before the 4th of July so we’d have to get through at least 48 hours here and hope the kids would recover enough for the long drive home to be tolerable. Our plans to stop at another amusement park, Dutch Wonderland, on the way home were demoted to “we’ll see” status.

One word has been key to planning this whole trip: downtime. The plan has always been: driving, fun, downtime, repeat. So Day 2 in Connecticut was all about downtime. By the next day, July 3rd, we seemed to be mostly back on track. The kids were still tired, but they had warmed to the less familiar relatives and were not as quick to whine or fuss as they had been. The problem now was boredom. After being constantly entertained in a house full of active children, Lilly, in particular, was having a tough time transitioning to a house full of adults and much older kids. Time for an excursion.

We found an activity with just the right level of excitement and activity for everyone at The Shore Line Trolley Museum in Branford, CT. A small, but well-run, operation that celebrates old trolleys and utilizes a remnant track from the trolley days in that area to run a restored trolley to entertain the young and old. Grammy (Elliott’s mom), Elliott, the kids and I had a great personal tour since no one else was there when we arrived. Lilly was delighted to collect and punch tickets and ring the bell each time the trolley started up. I really enjoyed the breeze from the windows and a relatively quiet outing. 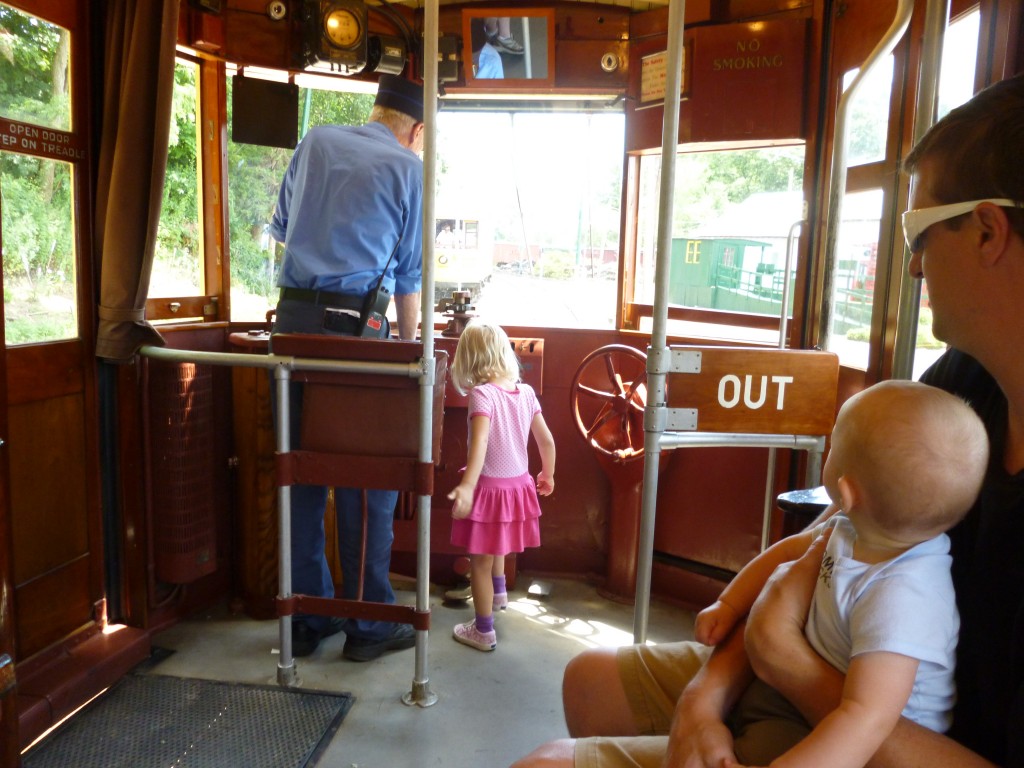 Lilly rings the bell (with a floor button) for departure.

And what boy doesn’t love a trolley ride? 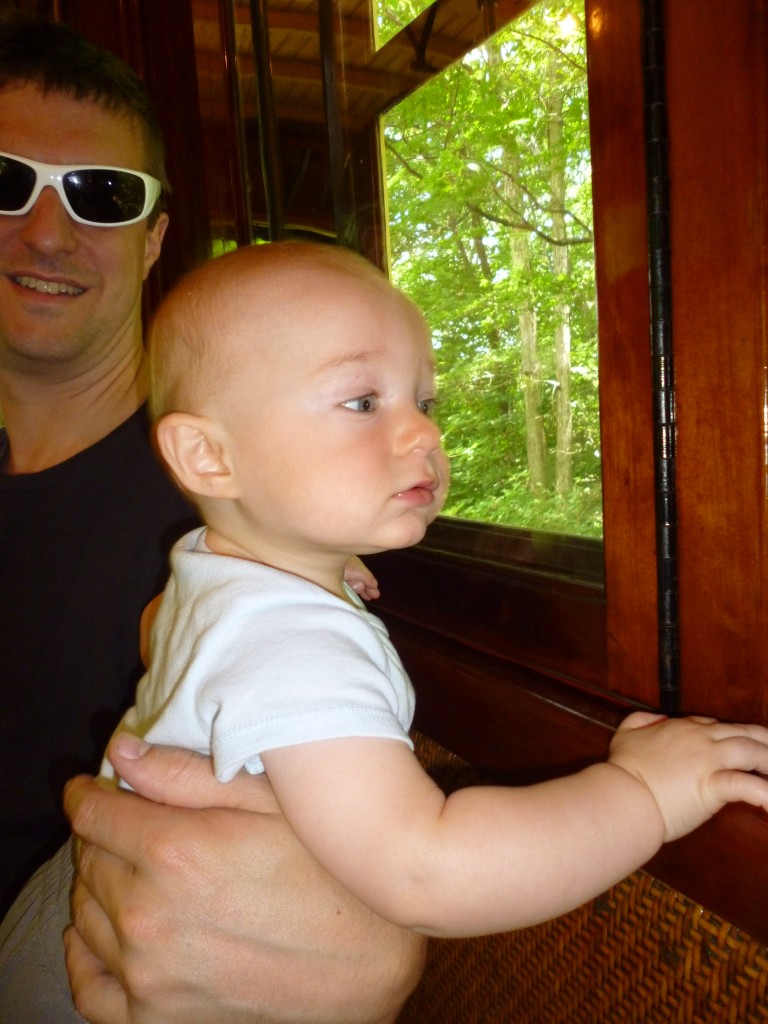 Henry takes in the sights from the trolley.

Now if we were smart we would have said, “Wow! That was great fun! Let’s go home and give the kids a chance to relax before the lobster bake tonight.” But we didn’t. Instead what we said was, “That was fun. The kids look like they’re getting a little tired. Let’s go for ice cream!” And we did. And Henry screamed the whole way there and the whole way back. Thankfully there was a hiatus from the the screaming while he tasted his first Italian ice. Needless to say, he’s a fan.

The lobster bake is a staple activity in Connecticut and we love it. Lilly was particularly excited. We discovered a few months ago on a random and extremely rare visit to Red Lobster  that she loves lobster. We were not sure, however, how she would deal with seeing her food alive and then on her plate.

This apparently was not a problem for her. She loved playing with the live lobster. 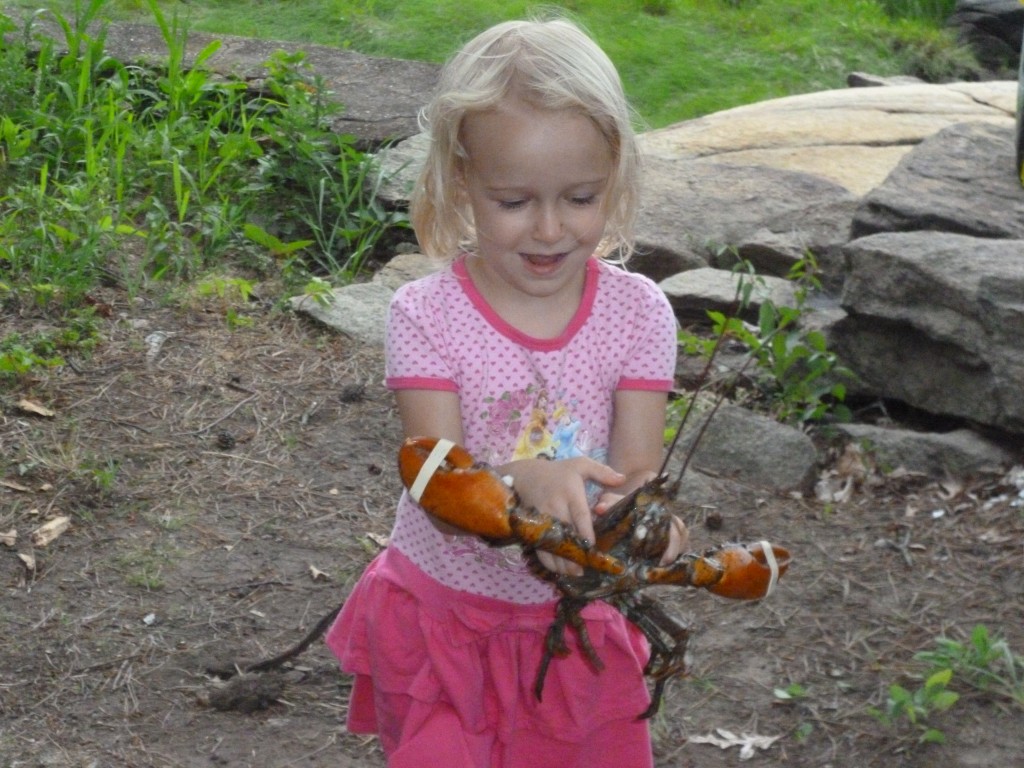 Lilly, meeting her dinner, impresses us with her bravery.

But I think she loved it even more once it was on her plate.

Lilly showing that she's pretty cool with the circle of life if it ends with a lobster on her plate.

The next day was the Fourth and it was all it should be. Family, barbecue, fun in the sun, a movie about a few brave individuals fighting their hardest to return to the land they love (Madagascar 3) and, of course, fireworks.

The day – and our visit to Connecticut – ended as well as we could have asked. Henry went to sleep relatively easily, we had a nice family dinner followed by fireworks on the water. From this particular point in Connecticut, you can see Fourth of July fireworks unlike anywhere else I’ve been. With a terrific view of the Connecticut shoreline and Long Island’s north shore and our own personal fireworks display, we were completely surrounded by bursts of color and pops of sound. This was Lilly’s first experience with large fireworks. I was a little afraid she’d end up with her ears covered, complaining about the noise. It was needless worrying (again). Instead she was jumping up and down, waving a small American flag, and screaming at the top of her lungs, “America!! Wooooo! America!!”

The only problem was that Lilly was once again up until 10 p.m. We were playing with fire in more ways than one.

The The Point by MushBrain, unless otherwise expressly stated, is licensed under a Creative Commons Attribution-NonCommercial-NoDerivs 3.0 Unported License. Terms and conditions beyond the scope of this license may be available at mushbrain.net.